Welcome to Day 28 of the 30 Days of Thanksgiving!  Today’s article was originally a guest post written by my hubby, aka Bikeman, a few years ago.  We had just found this picture at an antique store and it was still laying against the wall in his office.  His mom had the same one hanging in their home while he was growing up so it always brings back good memories.  We decided to do a little more research into its history… 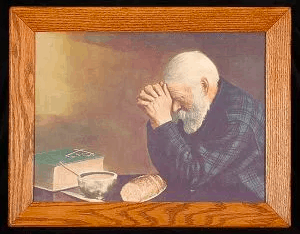 This post may contain affiliate links.  You won’t pay any more when you use these but I will earn a small commission on any purchases you make after clicking on them and I greatly appreciate it.  Thanks for helping support my little blog!!!

The Story Behind the Painting of Praying Man

In 1918 Eric Enstrom photographed a bearded, saintly, old man giving thanks to the Lord praying with folded hands to his brow before partaking of a meager meal. This famous portrait was entitled, “Grace.”  Enstrom wanted to take a picture of him to show people during World War I, that even though they had to do without many things because of the war, they still had much to be thankful for.  After taking the photo and as the negative was developed, Enstrom was sure he had something special… a picture that seemed to say, “This man doesn’t have much of earthly goods, but he has more than most people because he has a thankful heart.”

As I stare at this photograph – I glance over on my table where I am typing this and notice the cinnamon crumb cake and cup of decaf coffee staring at me as if to say…are you as grateful for this as this man was in photo?

Remove far from me falsehood and lying; give me neither poverty nor riches; feed me with the food that is needful for me, lest I be full and deny you and say, “Who is the LORD?” Prov. 30:8-9

Dear Lord, thank you for humbling me today and reminding me to be thankful to you for the daily provisions you have abundantly bless me with.

This picture reminds me of Luke 9:16-17.  Even Jesus gave thanks for His food!  And just a few loaves of bread and fish were enough.

Then He took the five loaves and the two fish, and looking up to heaven, He blessed them, and broke them, and kept giving them to the disciples to set before the people.  And they all ate and were satisfied; and the broken pieces which they had left over were picked up, twelve baskets full.  Luke 9:16-17 (NASB)