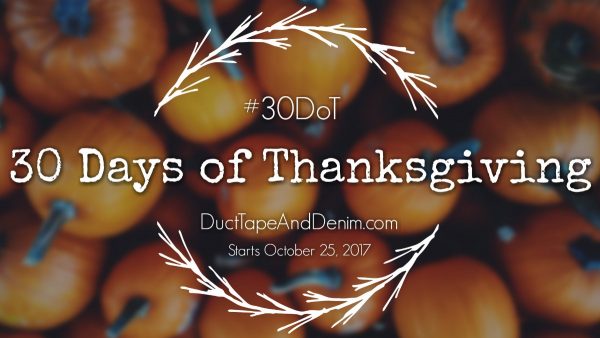 History Behind the 30 Days of Thanksgiving

I have always loved Christmas.  But in the last few decades the Christmas season seems to be coming earlier and earlier… eating up the previous holidays of Thanksgiving and even Halloween!  Bikeman calls it “Hallow-thank-mas”.

Celebrating the birth of Christ is an important part of the Christian religion but the materialism that shows up in our shopping malls two months before December 25 has little to do with the real meaning of Christmas.  Really… Christmas commercials in October are too early for me!

All this was the beginning of my “rebellion” against Christmas. Not that I refused to celebrate, although a few people did call me a “Grinch,” but I have refused to begin decorating our home until after Thanksgiving. And it’s usually on December 4th, Glenn’s birthday, when we start.

So, when my girls were little I began collecting stories, poems, and hymns about Thanksgiving.  I soon discovered that many other families were feeling the same way I did, that Thanksgiving was getting lost in the rush to Christmas.

One year I had a YahooGroup list (remember those?!?) and sent something to my readers every day in November.

That led me to start a YahooGroup one year where I emailed stories and poems out daily. That was a little too much for me so the next year I put them together in an ebook, which CurrClick now sells.

Now that I have a blog I’m going to try posting something every day (October 25 – Thanksgiving this year)  that I’m thankful for along with some of the poems, songs, prayers that I’ve collected PLUS Thanksgiving and fall-themed crafts and DIY home decor projects. This way I can include photos, too, and get feedback from others.

When I started a blog on Blogger and had what I thought were a lot of followers (72 at that time) I posted something every day that I was thankful for and encouraged others to do the same.

Now social media has made it much easier to share.

Here on the blog I’ll share many of those poems, songs, and Scriptures that I’ve collected along with crafts and home decor ideas.  But I also created a 30DoT Facebook group to make it easier for all of you to share, too.

This year I hope the “30 Days of Thanksgiving” movement will expand even more.

What You’ll Need for the 30 Days of Thanksgiving

You can keep it as simple as that.

To participate all you have to do is write down something you’re thankful for every day and share it with someone.  You can share it on a blog, Facebook, face to face conversation, or however you would like.  I encourage using a Thanksgiving journal just to keep up with everything and also write down Scriptures, prayers, quotes, or poems that talk about giving thanks.  The photo above is one of the pages in my journal from last year.

Some of the first projects will be how to start a Thanksgiving journal and ideas on what to include so don’t worry if you don’t have any idea about what to do.

Thanks for joining us.   For the next 30 days keep your eyes on what God has done for you and be thankful!