We’re back!  It was a great weekend at the Roses and Rust Vintage Market!  This was our first year.  I’ve heard and read about it for several years but never been able to go because of my job.  But since I “retired” from the office job this year it was possible.  The sale is Friday evening and all day Saturday.  So that I wouldn’t have such a long day on Friday, I decided to drive up Thursday and spend the night with Jordy.  And it just so happens that her local farmer’s market is on Thursday so we went down to see what was going on in downtown Chico.  I didn’t know there were that many people in Chico!  The streets were so packed that we couldn’t even get through some spots.  We decided to set up a spot there later this summer. 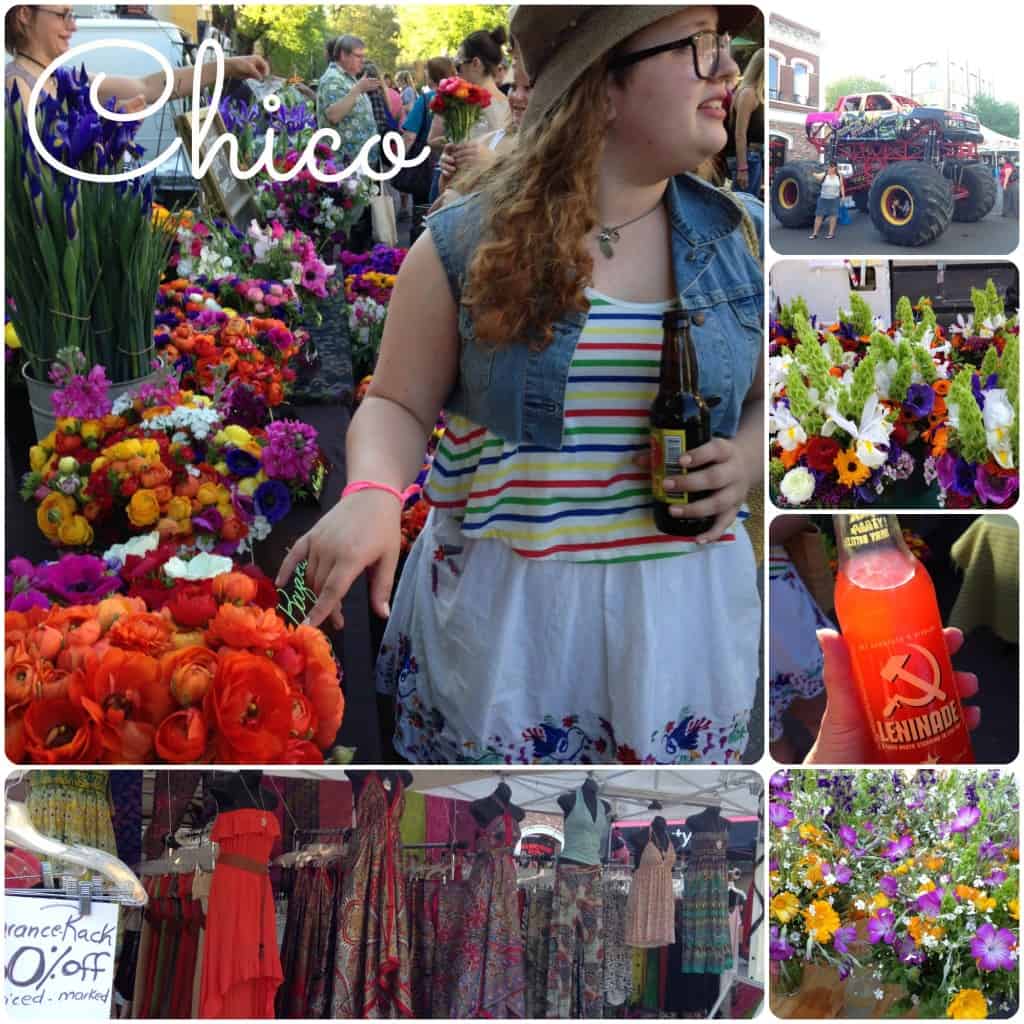 Friday we drove up to Anderson.  With a snowy Mt. Shasta in the background we unloaded and sat up our awkward little space.  There was just a slight misunderstanding about the space of our booth.  We signed up for the same size space that we had at Treasure Island so I assumed they would be positioned the same way.  But when we got there we discovered that they just cut one of the full size booths down the center so we had a long, narrow booth.  It was too late to do anything about it so we made do with what we had.  Everything fit but it was just a little crowded when the customers started coming in.  Next time we’ll get a full size booth… 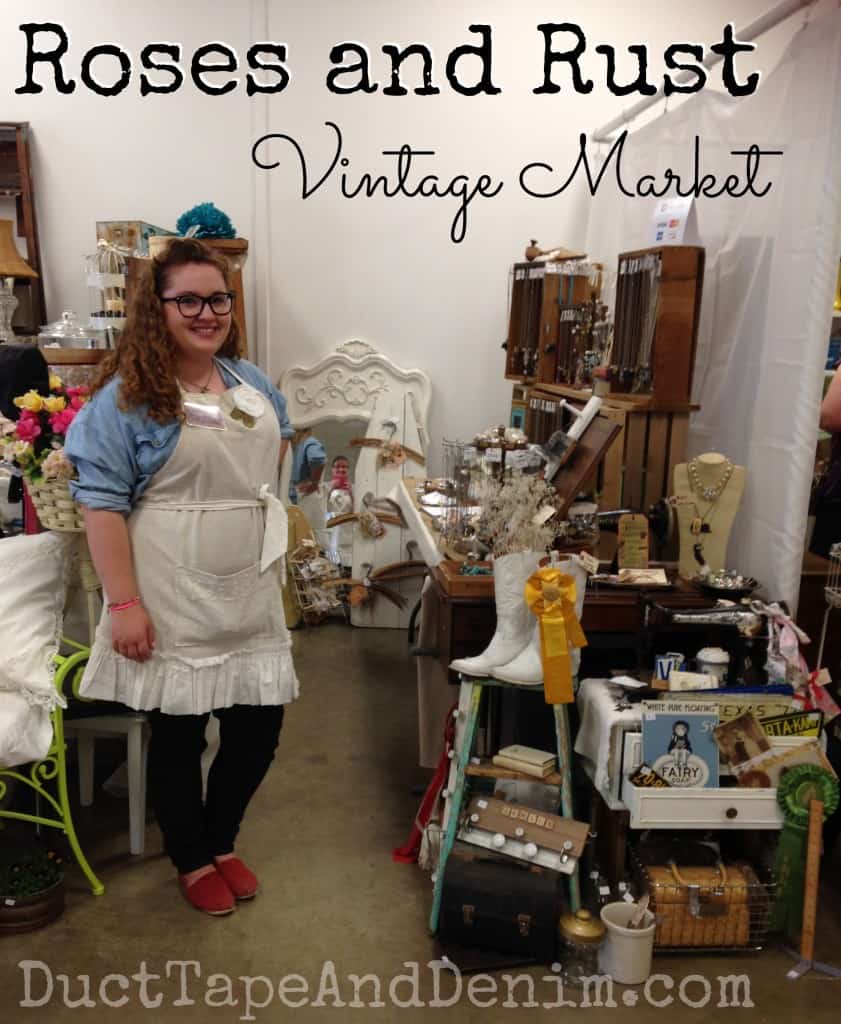 Yep, that’s our whole booth!  The flowers and everything behind Jo is our neighbors.  The curtain on the right side is our other neighbor.  Sadly, we heard several times customers left because they were overwhelmed and claustrophobic in our space.  We learned!

I wish I had taken more photos of all the other booths but we got so busy that I completely forgot.  I even missed photos from some of the campers in the vintage trailer rally!  That was fun.  I’ll post photos of the campers tomorrow.  Here are a few of the photos that I did get… a lovely mannequin made of vintage pattern tissue out in the Farmyard. 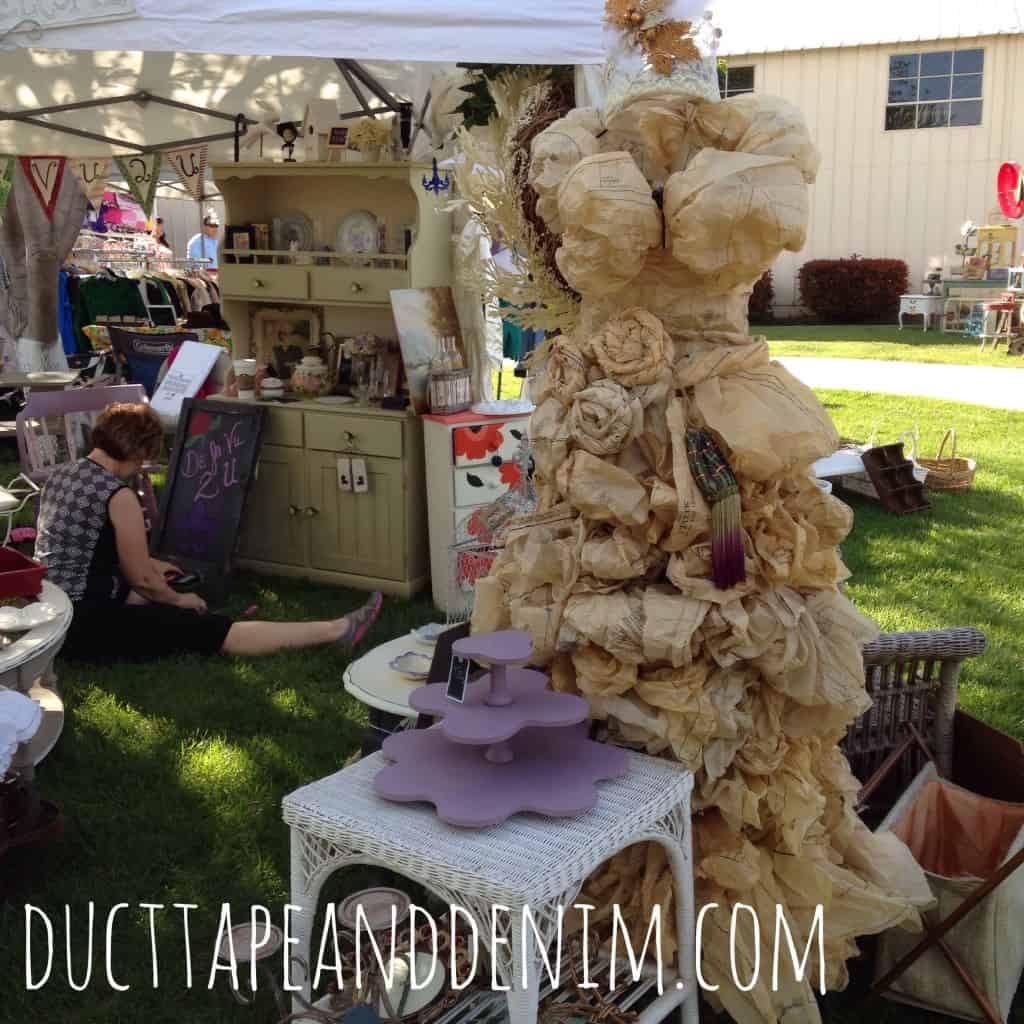 I took the photo from the front door of the barn on Friday night.  It was full of great antiques, junque, and handmade. 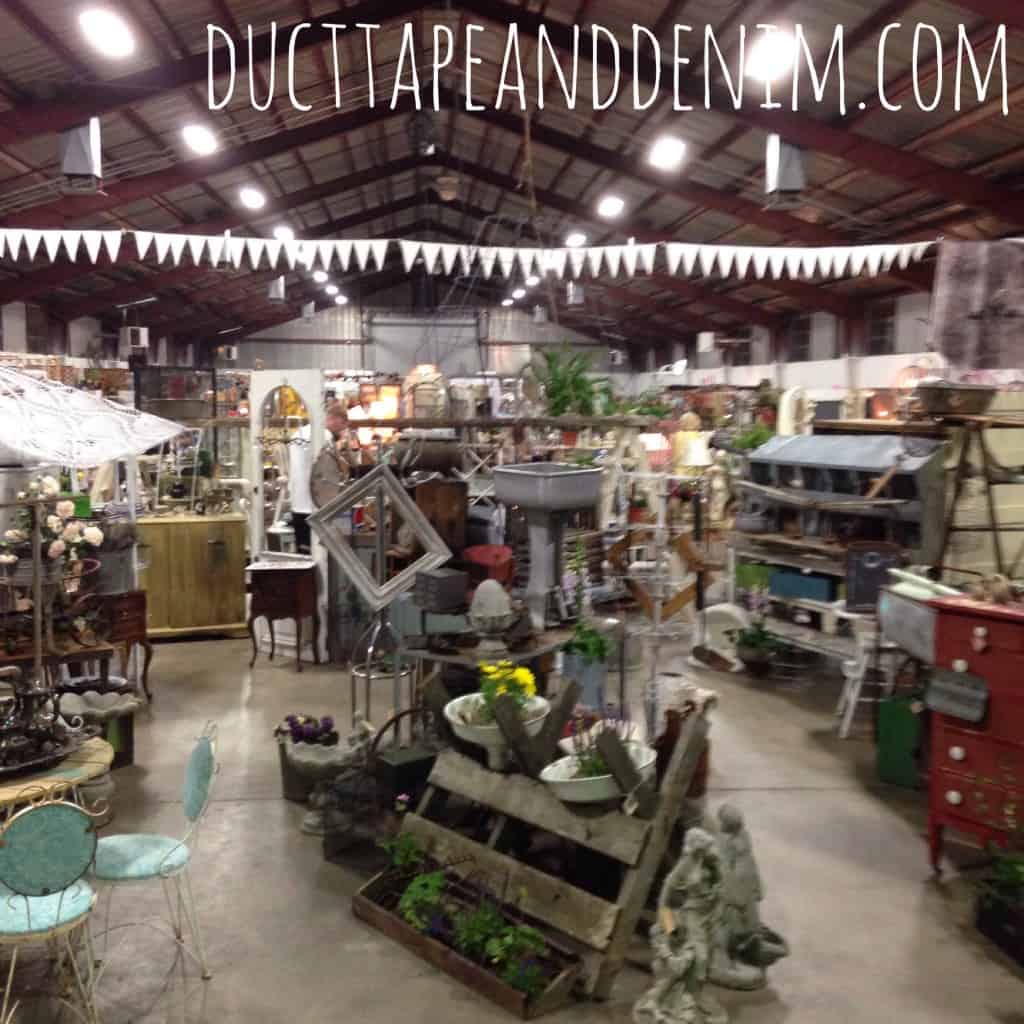 This adorable vignette was at the front of the barn in Bonnie’s space.  I love how the lacy tablecloth was used as an umbrella.  There was another booth that used a ‘naked’ patio umbrella to hang their empty frames. 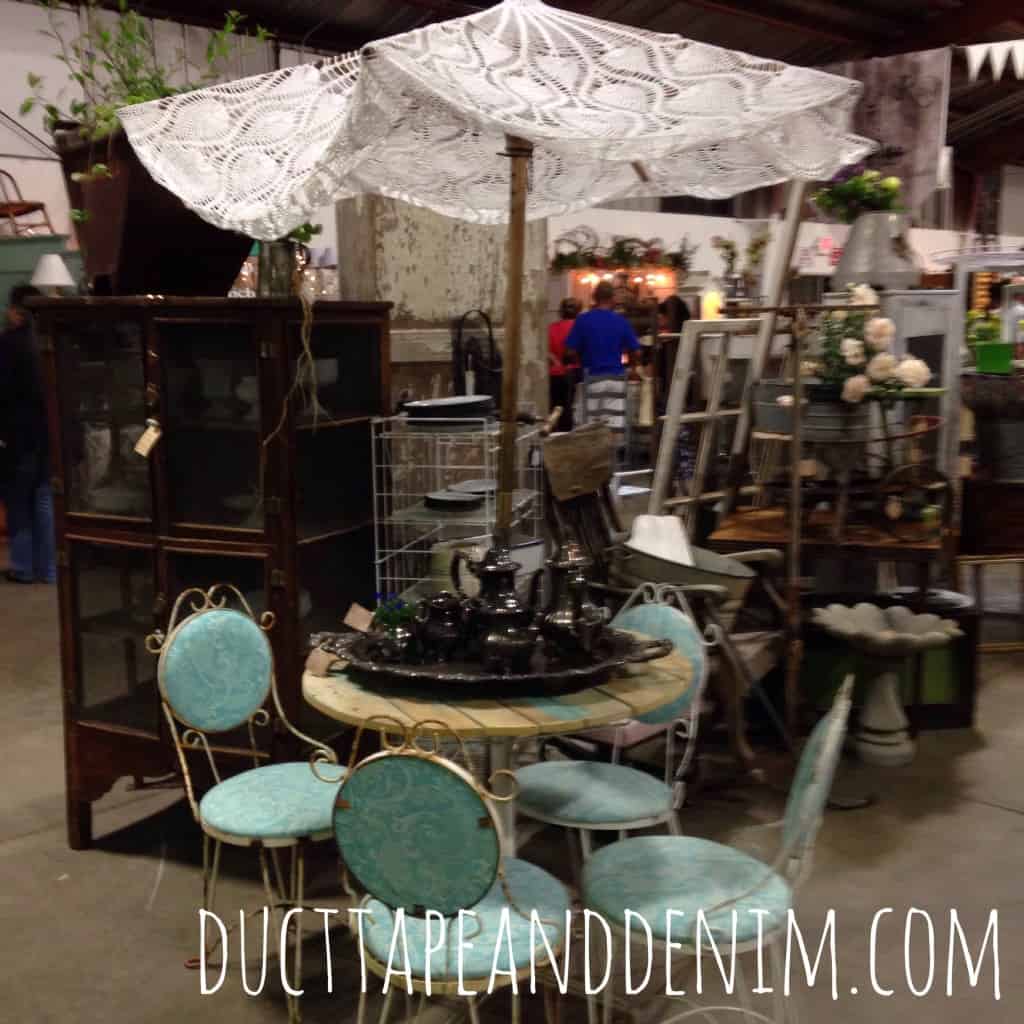 I’m always on the lookout for vintage wire egg baskets for my sister.  Hey, Sue Ellen, can you see the GIANT baskets on top of these shelves??? 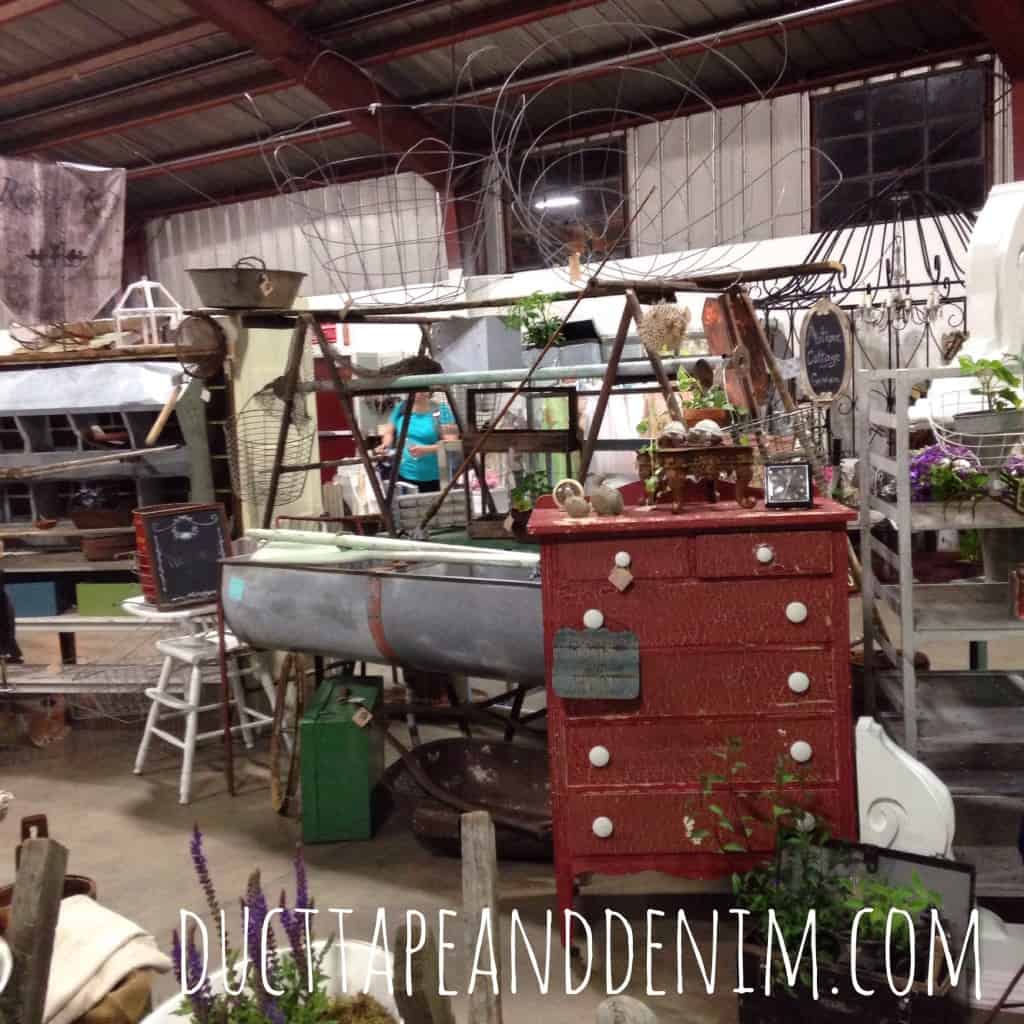 We sold a few big things Friday night (including the Shabby Cowgirl aprons that we were wearing) so we did a little rearranging and expanded a little out into the walkway after we saw everyone else moving that way.  Here Jo is showing off another Shabby Cowgirl apron made of vintage sheets. 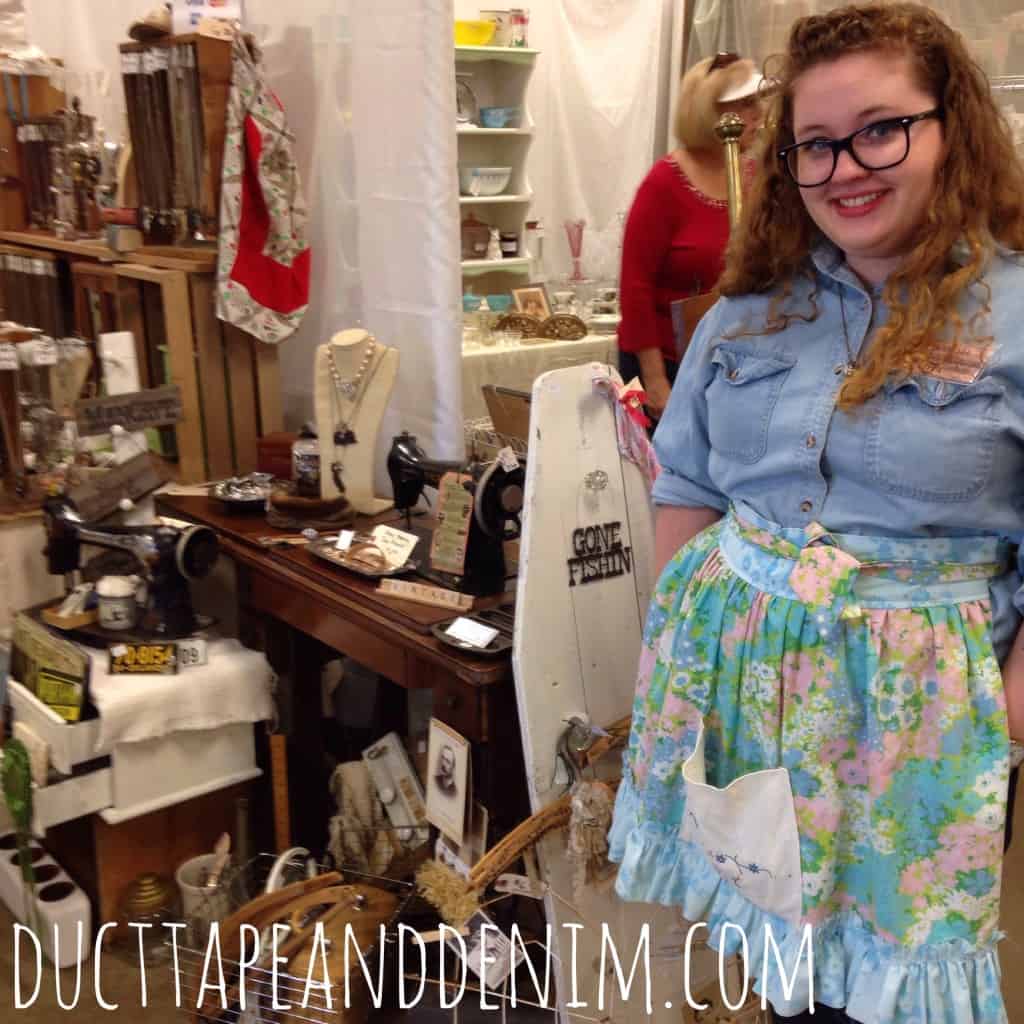